What is Rainbow Fentanyl? 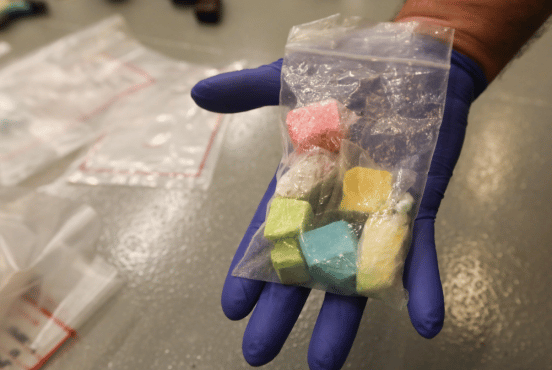 Rainbow fentanyl is a lethal form of an already deadly drug, and it is currently surfacing in California, Arizona, Oregon, and Washington, D.C.

The U.S. Attorney’s Office in the District of Oregon issued an alert concerning the life-threatening synthetic opioid. Additionally, law enforcement officials in West Virginia reported the discovery of a cache of rainbow fentanyl in Morgantown. Disturbingly, officers found the rainbow fentanyl in a city that is home to more than 25,000 college students.

Law enforcement officials in Northern California report recently confiscating rainbow fentanyl. There have also been seizures of these multicolored pills within the past week in Arizona and Washington, D.C.

Check out this brief Fox News video report for a glimpse at rainbow fentanyl. This will help you to avoid any potentially dangerous interactions with this substance.

The large batch of pills located and seized by Mon Metro Drug and Violent Crimes Taskforce resembled regular oxycodone pills. The tablets were stamped with M/30 just like oxycodone tablets. Rainbow fentanyl is named for the variety of pastel colors of the toxic pills found throughout the U.S.

What is Rainbow Fentanyl?

Rainbow fentanyl is a new version of a synthetic opioid that resembles candy or sidewalk chalk.

Like all forms of fentanyl, rainbow fentanyl is acutely toxic and possibly fatal.

If you encounter any variant of this powerful synthetic opioid, avoid the temptation to handle the substance and call 911 for further directions concerning the safe disposal of fentanyl.

What’s all the hype about fentanyl, then? Is it really that dangerous?

Why is Fentanyl so Dangerous?

Fentanyl is a synthetic cousin of heroin. Heroin is an illicit and highly addictive narcotic opioid. According to the DEA, fentanyl is up to 100 times stronger than morphine and responsible for driving the United States opioid epidemic into a third wave.

Using just a 3mg dose of fentanyl – this amounts to a few grains – can kill an adult male.

The emergence of IMF (illicitly manufactured fentanyl) on the streets of Oregon and in several other key states has triggered a spike in deaths by fentanyl overdose statewide.

Where Does Rainbow Fentanyl Come From?

William Ihlenfeld (United States Attorney for the Northern District of WV) stated that the law enforcement officials who seized the rainbow fentanyl pills in West Virginia believe the tablets were manufactured in Mexico then shipped to Oregon via California.

In a statement from the DA, he adds that rates of “adolescent drug overdose deaths have doubled”. Ihlenfeld reports that drug cartels, especially Mexican cartels, are employing innovative marketing methods to produce, transport, and sell fentanyl.

While some people may willfully seek illicit fentanyl, many others are unwittingly introduced to the synthetic opioid. Pop icon Prince died after ingesting tablets he believed to be Vicodin that instead contained fentanyl. Several other high-profile individuals have experienced adverse outcomes after ingesting fentanyl in the form of pressed pills.

What are Pressed Pills?

Pressed pills are counterfeit pills made to resemble legitimate prescription medications like oxycodone and hydrocodone. A pressed pill is often indistinguishable from the real thing.

Fentanyl traffickers and drug cartel use fentanyl powder and pill presses to replicate popular prescription opioids. Due to the high prescribing rates for opioid painkillers and the highly addictive nature of this class of drug, there is a vibrant black market for prescription opioids among those unable to legitimately refill prescriptions. Mexican cartels continue to capitalize on this demand by flooding the U.S. with pressed pills, fentanyl, and now rainbow fentanyl.

Buying any form of prescription medication from any source except a licensed pharmacist invites the possibility of obtaining pressed pills that contain fentanyl or rainbow fentanyl.

Of over 100,000 deadly drug overdoses that CDC reports for 2021 in the United States, synthetic opioids like rainbow fentanyl were implicated in more than 75 percent.

Connect with Evidence-Based Treatment for Fentanyl Addiction at Renaissance Recovery

Fentanyl is a potentially lethal synthetic opioid. Whether you encountered fentanyl as a prescription medication, in illicit form, or in counterfeit pressed pills, you can detox and withdraw safely and as comfortably as possible in a licensed medical detox center. Reach out to Renaissance and we can connect you with accredited detoxification centers near you.

After a week or so, you will be ready to engage with ongoing treatment for fentanyl addiction. Choose from the following treatment programs:

Like all opioid use disorders, fentanyl addiction responds positively to MAT (medication-assisted treatment) with one of several FDA-approved medications. MAT can also reduce cravings, encourage abstinence from fentanyl, and improve treatment retention.

MAT is always best when delivered alongside behavioral interventions. The Renaissance Recovery team will personalize a treatment plan so you can address the physical and psychological components of fentanyl addiction.

We also provide access to a variety of holistic therapies like mindfulness, meditation, and adventure therapy for a whole-body approach to addiction recovery.

Avoid rainbow fentanyl at all costs and address any opioid addiction, however severe, here at our Orange County treatment center. Get immediate assistance by calling 866.330.9449.

Photo provided by Department of Justice