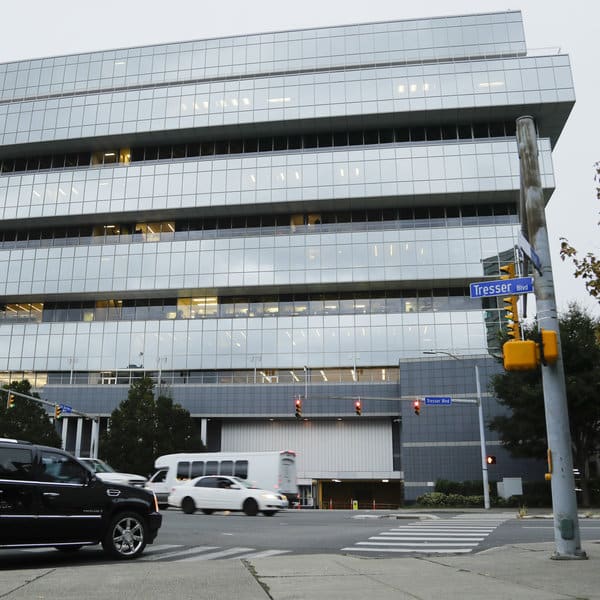 Purdue Pharma, facing a mountain of litigation linked to the opioid epidemic, filed for bankruptcy in New York this week. The OxyContin manufacturer and its owners, the Sackler family, have offered to pay billions of dollars to cities and counties hit hard by the addiction crisis. But that’s not good enough for critics such as U.S. Rep. Max Rose. “The Sackler family does not belong in bankruptcy court,” Rose, a New York Democrat, told a news conference earlier this week. “They belong in handcuffs and should be charged as the criminal drug dealers that they are. And just like criminal drug dealers, we should take every cent that they have.” Purdue and other drug companies have been forced to pay out hundreds of millions of dollars so far in civil lawsuits, which currently number more than 2,000 across the U.S. Prosecutors say evidence shows these firms pushed highly addictive opioid pain medication while downplaying the risk of addiction and overdose. They say executives engaged in racketeering and conspiracy, misleading doctors, insurance companies and government programs such as Medicare and Medicaid.

State and federal officials have known for more than a decade that drug-makers, distributors and pharmacy chains were playing an outsize role in this epidemic. A review by NPR found dozens of administrative actions where companies were ordered to stop distributing opioids in ways the federal government considered improper. There have also been settlements against drug firms involving criminal as well as civil charges. But none of those plea deals involved jail time. Sen. Maggie Hassan, a New Hampshire Democrat, has called for hearings to investigate why the Justice Department hasn’t put more of these drug company executives on trial. She’s also demanding that the Justice Department give her office a full copy of a 2006 prosecution memo focusing on Purdue, parts of which appeared in The New York Times last year. Hassan says she believes the document will show that some federal attorneys wanted more serious criminal charges filed against Purdue. “At the 11th hour, top political appointees at the Department of Justice blocked those indictments and as a result a much weaker set of plea agreements was entered into with these Purdue executives that really amounted to a slap of the wrist,” Hassan tells NPR. In 2007, several Purdue executives pleaded guilty to misdemeanor charges and agreed to perform community service. In a letter sent to Hassan and to Democratic Sen. Sheldon Whitehouse of Rhode Island, the Justice Department refused to release information about its decision-making in the case, citing “long-standing policy” against such disclosures. The department also declined to speak with NPR about possible criminal prosecutions involving Purdue Pharma. Hassan says that if prosecutors had been more aggressive in charging executives, the opioid epidemic might have been curtailed a decade ago. “The trajectory of this crisis might have been different and we might have saved a lot of lives,” she says. Experts interviewed by NPR offer different explanations for why state and federal prosecutors haven’t brought more criminal charges against drug companies and executives. Former federal prosecutor Michael Canty says criminal cases are just far more difficult to win. “One of the basic tenets of being a prosecutor is that you don’t bring a case unless you believe that you can prove a defendant’s guilt beyond a reasonable doubt,” he said. But Rick Claypool of the consumer advocacy group Public Citizen thinks there’s another reason: Drug companies have large law firms on their side, with well-connected attorneys well-versed in negotiating plea deals. “When the Justice Department is pursuing cases against the companies, the people on the other side that they’re often negotiating with are all too often former federal prosecutors,” Claypool says. “Right now, it’s the former U.S. attorney for the Southern District of New York, Mary Jo White, who’s representing the Sacklers.” In past negotiations with the Justice Department, Purdue Pharma and the Sacklers have also been represented by Rudy Giuliani, himself a former federal prosecutor. There are signs, however, that the drug industry is now facing more scrutiny by criminal investigators. In May, five executives with Insys Therapeutics were found guilty on racketeering and conspiracy charges. The Justice Department acknowledged that nearly two decades after the opioid epidemic began, this case was the first of its kind. “Today’s convictions mark the first successful prosecution of top pharmaceutical executives for crimes related to the illicit marketing and prescribing of opioids,” U.S. Attorney Andrew Lelling said in a statement issued at the time. “Just as we would street-level drug dealers, we will hold pharmaceutical executives responsible for fueling the opioid epidemic by recklessly and illegally distributing these drugs, especially while conspiring to commit racketeering along the way. “

The First of Many Opioid Lawsuits?

At least one other criminal case is now in the works. The Justice Department filed opioid-related charges against Rochester Drug Cooperative, one of the country’s largest pharmaceutical distributors, accusing two senior executives of conspiracy and fraud.

It is hard to ignore the problem of opioid addiction in the United States. The Opioid Epidemic has taken hundreds of thousands of American lives over the past two decades. With the rise of opioid overdoses and addiction to opioids, it is clear that there is a major issue in the country. That said, there are treatment options and ways to get help for those who need it.

Renaissance Recovery is a drug and alcohol treatment center that provides opioid treatment for those who need help. If you or a loved one are struggling with an addiction to opioids, or some other substance, please call our admissions team today at 866.330.9449!