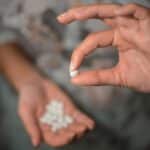 Opioids are a class of drug that act on the body’s opioid receptors. While the term “opioid” previously referred to drugs derived from opium—a narcotic drug derived from the poppy—modern opioids can also be partially or totally synthetic. Within the context of medical use, opioids are most commonly prescribed for intense or chronic pain relief—however, opioids can also be prescribed to treat diarrhea or cough. Prescription opioids are available in multiple forms: syrups, tablets, capsules, nasal sprays, skin patches, suppositories, and liquids for injection.

Some of the Most Common Opioids Include:

While all of these drugs can be helpful in specific medical treatments, they can also used improperly for non-medical reasons.

Other Short-term Side Effects of Opioid Use May Include:

Long-term Opioid Side Effects Include:

It is important to note that, even when taking opioids as prescribed, there is a significant risk of becoming physically dependent on the drug, and/or developing substance use disorder.

Using opioids for a brief period of time, and only as prescribed by a doctor, is considered the safest way to use opioids. As per the National Institute on Drug Abuse, drug misuse is defined as “taking a medication in a manner other than that prescribed or for a different condition than that for which the medication is prescribed.” So, opioid misuse entails taking the drug in a way that diverges from a doctor’s instructions, using someone else’s prescription, or taking the drug for the experiential effect rather than its intended medical use. It is important to note that opioid misuse can lead to lethal overdose, given that opioids can suppress breathing. Opioid misuse and overdose is an issue with national consequences, and has been since the rapid increase of opioid prescription in the late 1990s. According to the National Vital Statistics System, in 2015, more than 33,000 Americans died of opioid overdose. Despite the addictiveness and lethality of opioids in general, they remain commonly-prescribed drugs due to their efficacy and availability. Fentanyl has also become increasingly present in illicit drug circulation, evidenced by the drastic increase in fentanyl-related deaths in the United States and Canada in the last few years. Obtaining and using any opioid drug illicitly carries greater risk of consuming an unexpected—and potentially highly dangerous—substance.

The risk of becoming dependent on opioids is still present even if taken as prescribed by a physician. When someone is dependent on or addicted to a substance, they continue to use it despite its negative consequences. They tend to fixate on the drug, focusing their thoughts and efforts on acquiring enough to continue their use. Regular use of opioids leads the body to expect the continued effects, and responds with withdrawal symptoms if the cycle of use is broken.

Opioid Withdrawal Side Effects Include:

The severity of the withdrawal depends on the length for which it was taken, which opioid was used, and the dosage of the drug that was used. It’s also important to understand the effects of post acute withdrawal syndrome, which can last much longer.

The first step in treating heroin or opioid addiction is detox, also called Rehab. At Renaissance Recovery, we’ll help arrange your detox/rehab treatment. We’ll find and recommend the best program for your exact situation and, we’ll check all insurance options, including your private healthcare or state/federal healthcare programs for which you might be eligible. Detox can take five to seven days before you’re substance free, but you’ll actually be in rehab for a 2-3 months. This allows you time to start to think with a clear mind and to start digging into the underlying causes for your addiciton. After detox/rehab, it’s time to move on to either an Intentsive Outpatient Program or a traditional outpatient program, such as sober living homes. In either scenario, rigorous treatment continues over the course of many months. Adapting to a sober life is not without challenges, so most patients’ avearage stay in post-rehab recovery is nine months. Your addiction didn’t happen overnight and recovery won’t happen overnight, either. At Renaissance Recovery we understand the importance of combining supervised opioid detox and addiction treatment in a comprehensive program for successful recovery. Our non 12 step program uses evidence-based practices to treat all forms of substance use addiction, including heroin and opioids.

Some of the Proven Treatment Modalities we Use for Opioid Addiction Include:

We utilize a variety of holisitc treatment methodologies as a way to inspire and empower our clients through their struggles with addiction and recovery. Contact us now about our opioid addiction treatment programs here in Orange County, California.

Let us help you get the opioid addiction treatment you need.

PrevPreviousAm I An Addict?
NextHow Much Does Rehab Cost?Next