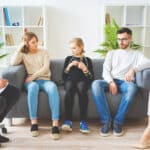 If a member of your family is suffering from an addiction it’s likely causing friction and stress for all of you. Family roles plays an important part in addiction treatment.

The family is like a tribe that when functioning protects one another.

A functioning family is like a clock consisting of a series of interdependent cogs that seamlessly work together. But if one cog starts to malfunction it causes the whole system to jar throwing family life into chaos.

Watching a loved one’s self-destructiveness is a painful experience. And it’s probably changing you as a person too.

Addiction is a family disease.

A family can be thrown into chaos by addiction, and it can also exacerbate the addicted family member’s problem.

If you or a loved one is suffering from a substance use disorder and you enter rehab, you and the family will probably be encouraged to have family therapy.

The Root of Addiction

Addiction used to be treated as a sign of moral failure or weakness. This approach is now outmoded. It is now considered to be rooted in emotions and negative thought patterns.

Family life can be stressful and can be responsible for triggers that cause a person to engage in addictive behavior or take a substance.

This doesn’t mean that it’s your fault they are addicted, but it’s important to understand your role in the person’s addiction.

As a person’s addiction progresses, so do the coping mechanisms of family members. Unconsciously, each family member adapts psychologically to compensate for the loved one’s substance use disorder.

When a family member develops a substance use disorder it forces other family members to unconsciously adopt certain coping behaviors.

If you identify with any of these roles it can help you understand the family dynamics better and learn to cope more effectively.

It’s important to note that these labels aren’t prescriptive. Families are complex and diverse. You may identify with more than one of these roles.

Wegscheider-Cruise’s 6 roles include: the Addict, the Caretaker/Enabler, Hero, Scapegoat, Mascot, and the Lost Child.

The person often manages to function in their daily life to a certain degree. But, as their problem progresses their behavior changes. They can become irritable, erratic, and blame others for their problem.

An addicted person’s life revolves around obtaining more of a substance to cope with negative feelings.

The enabler is a common role that is played out in families affected by addiction.  This role is often adopted by the spouse or parent of the addicted person.

This role tries to help the addicted person but in reality, they are making their problem worse. They may:

But, this keeps an addicted person in a cycle of addiction because they don’t get to feel the uncomfortable consequences of their actions and habits.

To break this cycle the caretaker needs to accept the negative consequences of not giving in to the addicted person’s demands and stick to firm boundaries. A person is more likely to seek treatment when they become exhausted and uncomfortable with not being able to satisfy their withdrawals.

The Hero role is often played out in families with children of alcoholic parents because their parents can become extremely critical. Nothing is ever good enough for them.

Alcoholic parents can become overly critical of both themselves and their children. So the child grows up with extremely high standards set by the alcoholic parent.

As a result, to survive the child of the alcoholic parents decides they must be perfect. They tend to adopt perfectionist tendencies to avoid criticism.

The child who plays the hero role becomes an overachiever to compensate for their family. The hero often ends up in a career that is not aligned with their values, but careers that make them successful.

The scapegoat role is common in alcoholic family roles.

A dominant feature of alcoholism is denial. So a strategy to continue denying the problem in the family is to focus on the scapegoat child.

Some parents focus their attention on a child to avoid seeing what is happening in the family as a whole.

They continuously point a finger at that child to deflect attention away from themselves.

The scapegoat child has received a lot of attention in psychological studies. It is dangerous for a child to receive continuous blame.

As a scapegoat child grows up, they start to believe that they are the problem and adopt the role in adulthood. As they are used to receiving this type of attention, they can have difficulty distinguishing when someone is being unkind to them.

They are so used to taking on the blame that they believe that everything is their fault. In later life, this role can manifest as self-sabotage, a tendency to end up in abusive relationships, an inability to identify people that are not in their best interests, and poor boundaries.

The child that plays the lost child role copes with a parents’ alcoholism by disappearing into their fantasy world.

As the reality is so unpleasant for them, they build up an inner world that feels comfortable to them.

The lost child can often be highly creative.

To the outside world the Lost Child appears quiet, creative and artistic. They may become a writer, painter, or a musician.

This type of person seems independent, agreeable, and self-sufficient. They rarely voice strong opinions and avoid conflict. In reality, they feel a range of emotions such as feeling left out, angry, sad, and isolated.

During family conflicts, the Lost Child will strive to fly under the radar. They lie low and seem unaffected by family drama.

In the long term, this person may have difficulties getting close to people and developing trust in others. They tend to prefer isolation to being with groups of people, however they long for human connectedness.

The Mascot role is all about getting positive attention.

They joke around a lot and often have great artistic skills. No matter what is happening in the family, the mascot will always make a joke of it.

The Mascot is a little like the scapegoat, only in reverse.

As this child is perceived as a ray of sunshine that brings positivity to the family they always develop great talents for acting, comedic skills, and are fun people to be around.

But, as this role has grown up making a joke of all situations they can’t comprehend why people have serious conversations. Because they are always clowning around, there is always a slight mistrust in the mascot from others.

The mascot appears a little disconnected because they mask their true feelings with being entertaining.

For your addicted loved one to overcome their addiction each family member needs to heal the maladaptive behaviors and emotions that they have developed in response.

Becoming familiar with these roles and identifying how they can play out in later life can be useful for family members to understand certain thought processes.

When family members identify with certain family roles they can then work to heal them. The interdependent nature of family roles means that when they heal and transform it has a positive impact on family dynamics.

As a result, a more harmonious family dynamic can create an environment that is more conducive for the addicted person to heal.

Research shows that addicted people whose families receive family therapy in tandem with treatment for a substance use disorder have higher rates of sustained recovery.

Family therapy improves communication amongst family members. When facilitated by a skilled family therapist, family members can vent and air grievances. Once the air is cleared the family can then start to heal.

The addicted person learns how their substance abuse impacts those who do not use substances.

Each family member gets a personal development goal to achieve a happier and more positive state of mind. They can learn to modify their behavior with the common goal of achieving harmony in the family unit.

As positive changes take place, the family as a whole understands what is happening so the addicted person doesn’t feel as though the others are ganging up on them.

Every family member has a certain amount of ability to help their addicted loved one by learning to see the family system more holistically and logistically.

With the support of a therapist, you can learn new rules and roles to implement in the family system to facilitate the support of the addicted loved one.

The positive impact of family therapy can be so profound that it can even have a long-lasting multigenerational effect. Our behavioral patterns can affect others even beyond our death.

Healing each family member’s dysfunctional behavior and emotions have the power to consolidate an addicted person’s role to stay substance-free for the long term.

Family therapy isn’t just for the duration of the loved one’s treatment, this is a long term goal that needs maintenance and continuous support.

Family members can continue to play their role in the healing of their addicted loved one by practicing mindfulness to manage stressful situations. They can also join 12 step support groups such as Al-Anon for Adult Children of Alcoholics.

By identifying and overcoming the negative emotions and behaviors that you may have developed over time not only will you help the addicted person become free of substances, but your life will go through some positive changes for the better. If you are interested in learning more about substance abuse treatment, please call us to learn more about our Orange County rehab.

Getting Help for a DUI in Orange County

While OC DUI arrests decreased dramatically during the early stage of the pandemic, they have since increased, and if you’ve been charged with a DUI

10 Signs Your Kid is Using Drugs

Drug and alcohol use tends to begin at an early age. It is a fact, your child will be exposed to drugs and alcohol in

How to Fight Addiction

Learning how to fight addiction is something few people consider when they first start abusing drinking alcohol, using prescription medications, or experimenting with illicit drugs.