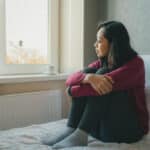 Alcohol may be legal and socially acceptable, but alcohol abuse can lead to dependence, addiction, and alcohol withdrawal symptoms when you stop drinking.

Unfortunately, the thought of these withdrawal symptoms puts many people off getting the treatment they need, like help from our California rehab.

Today, then, we’ll break down what you can expect if you engage with treatment for alcohol use disorder, and you’ll be better placed to prepare for detox and withdrawal.

Data shows that roughly half of those diagnosed with alcohol use disorder will experience withdrawal symptoms at some stage during detox. It’s vital to manage this challenging phase of withdrawal effectively to kickstart a sustained and successful recovery.

Alcohol withdrawal syndrome, sometimes abbreviated to AWS, is a term used to describe the withdrawal symptoms heavy drinkers experience if they stop drinking abruptly, or if they drastically cut back on their consumption.

Alcohol withdrawal symptoms can be both physical and psychological, as we’ll outline below.

What triggers these withdrawal symptoms, then?

Well, when you drink excessive amounts of alcohol long-term, it leads to some changes to your central nervous system. Alcohol has a strong sedative effect. When you drink large amounts of alcohol, or if you drink to excess long-term, you’ll be almost continuously exposing yourself to a powerful depressant effect. Your brain responds to this imbalance by producing chemicals to negate the sluggish feeling alcohol can induce.

If you are actively addicted to alcohol, your brain will have higher levels of both norepinephrine and serotonin. If you suddenly remove alcohol from the equation, your brain will feel overstimulated. As this happens, your CNS struggles to cope with the absence of alcohol. It is at this point that AWS often manifests.

If you are alcohol dependent, or if you consider you have alcohol use disorder, even if undiagnosed, you should speak with your healthcare provider if you are thinking of committing to sobriety. You should not stop abruptly and without medical guidance.

To diagnose AWS, your doctor will use questions from the CIWA-Ar, which assesses the following 10 symptoms:

Your doctor will also ask some accompanying questions to determine whether you’re thinking lucidly.

Even if you find the idea of opening up to your healthcare provider distasteful, you need to be completely transparent if you want to commit to recovery. Also, if you have been drinking to the extent it induces withdrawal symptoms when you stop, you may have caused more damage inside your body.

Your doctor may also give you some basic nutritional advice if you’ve been eating poorly as a result of alcohol abuse.

AWS can be categorized as follows:

With mild AWS, you can expect correspondingly mild symptoms.

With mild withdrawal, you can expect headaches and tremors along with abdominal pain and gastrointestinal issues.

Sleep patterns may be disturbed.

Vomiting and appetite loss are commonplace at the milder end of alcohol withdrawal.

In the early phase of mild alcohol withdrawal, you’re likely to feel depressed. This is expected and the feeling should subside.

As well as the above symptoms, with moderate AWS, further side effects manifest.

Hyperthermia (raised body temperature) and rapid heartbeat as well as sweating and shallow breathing are some of the more common moderate AWS symptoms.

An increase in systolic blood pressure is also a routine physical side effect with moderate alcohol withdrawal.

Mood swings often accompany mild alcohol withdrawal, as does a sense of general confusion as well as irritability.

As well as all of the above withdrawal symptoms, severe AWS can be dangerous if you are not in the right environment.

Fever and high blood pressure are the most common physical symptoms of severe AWS.

There is a risk of seizure with severe alcohol withdrawal.

Disorientation and hallucinations characterize the delirium tremens (DTs) that can occur during severe AWS.  This is potentially dangerous.

There are many variables that impact the extent and the intensity of the alcohol withdrawal symptoms you experience, including:

Not everyone develops all of the above symptoms, but alcohol withdrawal follows a predictable pattern.

Here’s what to expect over the first week without alcohol in your system:

Here is a glimpse at when the following common symptoms occur:

Most alcohol withdrawal symptoms manifest between 5 and 24 hours after you stop or reduce alcohol intake.

Most mild and moderate symptoms can be self-managed. Less severe symptoms normally fade within the first week of abstinence.

Severe alcohol withdrawal, though, typically requires medical treatment, often in a residential setting. Symptoms persist for longer, and these effects normally appear within a few days of the last drink.

With more mild alcohol withdrawal, a social detox at home is often effective. You’ll need to ensure you have a suitably supportive home environment, and that you don’t have any experience of failed attempts to detox. Home detox works best in those with no serious underpinning health conditions.

Eat healthily and stay hydrated during home detox. Ensure you have supervision on hand if required.

Now, home detox is not always advisable, and can even be dangerous. For more severe alcohol withdrawal, detox should be clinically managed at a treatment center, via inpatient or outpatient treatment. Medication can soothe some symptoms of anxiety and insomnia. You will also have access to anti-seizure and anti-psychotic medications if needed.

Is It Possible to Avoid Alcohol Withdrawal?

There is only one failsafe way to avoid alcohol withdrawal, and that is not to drink abusively in the first place.

If you’re already past the point of no return, though, take heart that you can return. It will require effort and it might be uncomfortable, but you can conquer the symptoms of alcohol withdrawal and reclaim the life you lost to alcohol abuse.

If you have been drinking heavily and long-term, make every effort to cut down on your alcohol intake before stopping completely. This should take the edge off the symptoms and make them slightly less intense.

While we mentioned that only 5% of those withdrawing from alcohol experience delirium tremens, as many as 15% of that slim percentage die as a result. This reason, along with the possibility of seizures, means that medically-supervised detox is critical if you are severely dependent on alcohol and liable to get the DTs.

How about if you’re ready to stop drinking and undergo alcohol withdrawal, then?

The first thing to keep uppermost in mind is that detox and withdrawal from alcohol is not a cure for alcohol use disorder. Recovery is not a single event, but rather an ongoing process.

If you choose to engage with our treatment programs here at Renaissance Recovery’s Orange County rehab, we’ll ensure we coordinate your alcohol detox and withdrawal so the experience is as comfortable as possible. We use FDA-approved medication to help ease the intensity of those withdrawal symptoms, and at the same time, these medications can minimize the cravings you experience for alcohol.

MAT (medication-assisted treatment) is delivered in an intensive outpatient or partial hospitalization setting in combination with psychotherapy. Psychotherapy like CBT and DBT will help you identify the people, places, and things that lead you to abuse alcohol. Talk therapy will also help you create and implement healthy coping strategies to thrive in your recovery rather than relapsing.

Just as there is no boilerplate solution for alcohol use disorder and alcohol withdrawal, so we personalize all out treatment programs to cater to your needs and budget.

Although by no means everyone in recovery from alcohol use disorder chooses to engage with 12-step programs like Alcoholics Anonymous, the powerful peer support of these groups is something many clients find beneficial.

Remember: DTs accompanied by severe alcohol withdrawal symptoms can be fatal: don’t go this along. Call the friendly Renaissance Recovery addiction hotline at 866.330.9449 and we’ll help you get back on track.